inscribed with his name,

Provision of priests to offer Mass here proved fragile, since they were often needed elsewhere.   Local resident, Mr. Francis Parsons, wrote urgently to Bishop Danell (Southwark), resulting in the appointment of Fr. Francis Roe, who was instructed by telegram to leave his curacy in Gosport and be in Caterham by Sunday 24th August 1879.  He was still only 29 when he was appointed to found the new mission at Caterham, where he spent the rest of his life.  At his first Mass at the Depot on the Sunday in August 1879 his congregation consisted of fifty soldiers and twenty five civilians, along with some children.  Within two years he had commissioned and completed the Sacred Heart Church.Parish Primary School
Whilst the Church was being built Fr. Roe was not idle and opened a school in 1880 in a small building in Town End, thus founding St. Francis’ Primary School which is today situated on Whyteleafe Road.  It started with 14 pupils.Caterham did not officially become a parish until 1923.   Before then it was a Mission which initially included Purley, Coulsdon, Chelsham, Farleigh, Warlingham, Woldingham, Whyteleafe, Kenley, Marden, Godstone and South Godstone, and Bletchingley.

It is to Fr. Roe, or more accurately his father, Captain William Harriott Roe, a convert, that we owe our fine Grade II listed Church and the Priest’s House.   Capt. Roe had ‘married money’ and used the wealth of his wife Mary to build most of the Church and the house for his son.   The foundation stone was laid by Bishop Danell on 24th June 1880.  The Tablet reports “The Church will be entirely constructed of stone, Reigate stone forming the material of the walls, faced with Burgate stone.   The interior will be lined with Box ground stone (the same used in the Chapter House of Westminster Abbey).”

The Church was opened on 11th August 1881.  Cardinal Manning presided and preached at the Mass sung by Bishop Lacey of Middlesbrough;  Bishop Danell had died two months previously.

The Original Architect
The architect was E. Ingress Bell. The original design included a tower and spire which were never built. A relic of this intention exists in the building.   On entering the Church and turning right, behind the pillar of the archway there is a door which conceals a few steps which were to intended to lead up the tower.  The north aisle was not built until much later.  Owing to a family quarrel after the death of Mrs. Roe, Captain Roe refused to continuing funding.
Of  the windows in the apse, supplied by the famous John Hardman & Co. Ltd. of Birmingham, the central window dates from 1881, the remainder from 1889 together with the murals.   Each of the individual scenes in the windows has a relevant scriptural quotation in Latin.     The artist for the murals was Joseph Aloysius Pippet  one of Hardman’s chief designers The lower levels of the murals eventually deteriorated and were painted over.  The tiles are from the well known Minton factory. 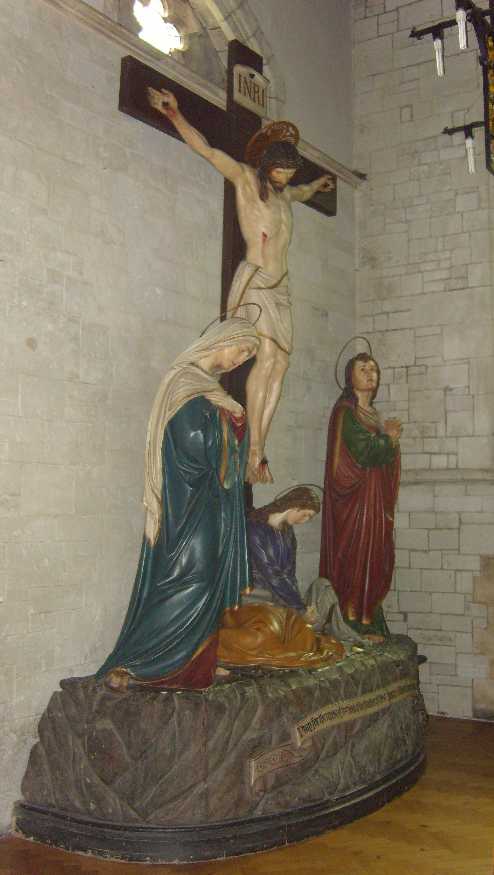 Before Captain Roe died in October 1886 he and his son were  reconciled;  he was buried in a specially constructed vault under  the north transcept.   The calvary, now at the back of the Church, is his memorial.   It came from Austria and cost £80 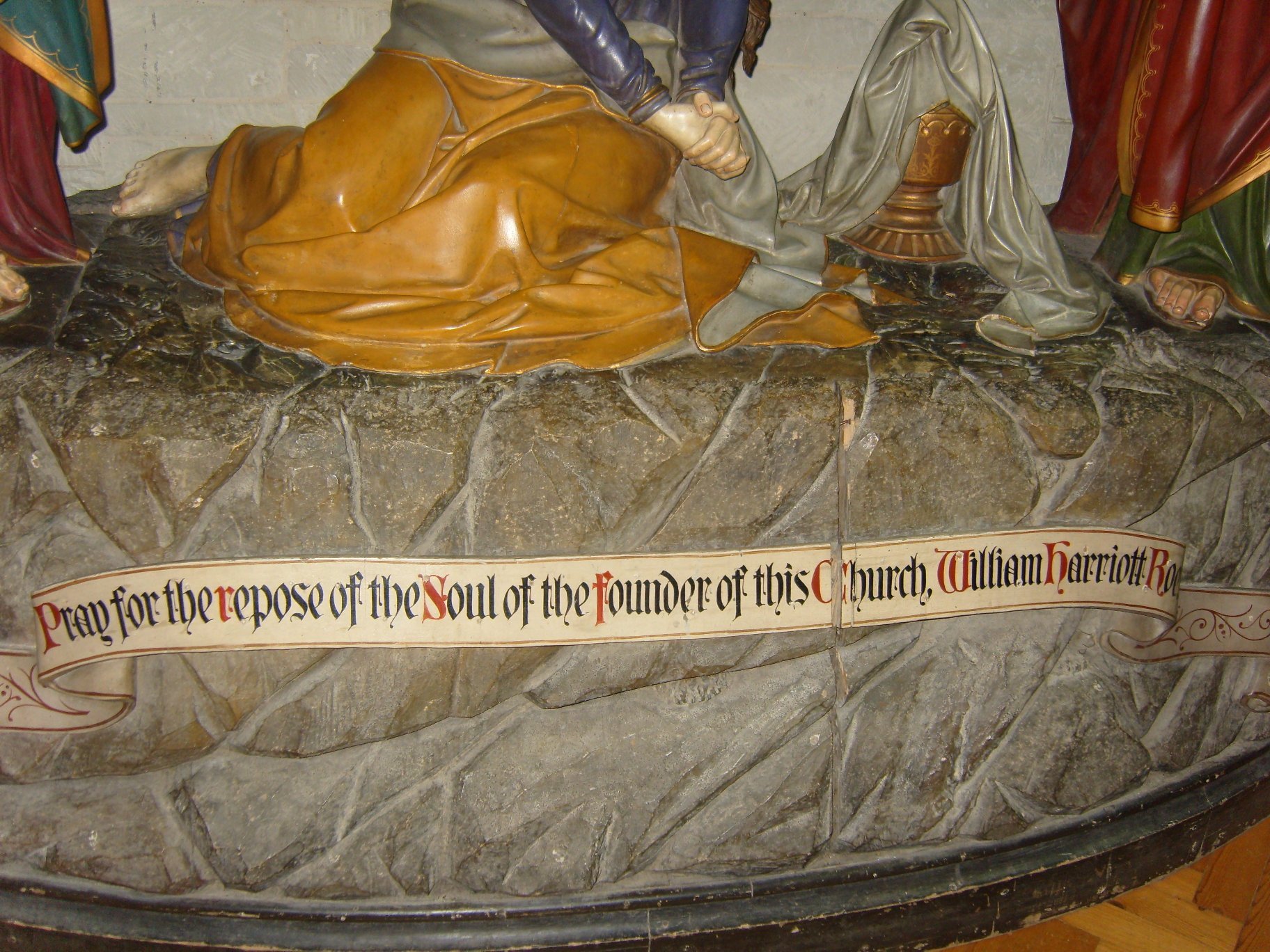 One other piece of church furniture was still required – an organ.  Canon Cooksey tells its story: “The organ in the church was bought by Fr. Roe at the ‘Fisheries Exhibition’ where it was exhibited by Messrs. Bishop the builders and was the one on which a schoolboy named Henry J. Wood (the future Sir Henry) gave short recitals each day.”

Today it is amazing to think that the whole complex was built in less than fourtheen months, and within two years of Fr. Roe’s arrival in Caterham, and all for a total cost of £5,000!

The flag presented to the 2nd Battalian of the Irish Guards by The Prince of Wales on 14th January 1919 was deposited in the Church on 30th June 1919.   It used to hang on the south side of the Sanctuary but is now preserved in a glass case.  Guardsmen continued to march to Mass at the Sacred Heart until April 1940 when a Catholic Guards’ Chapel was opened at the Depot.  A brass bell was presented to the Church by the Irish Guards in 1961.  Patients from St. Lawrence’s Hospital also walked to Mass at the Church.

The number of parishioners grew and by 1931 the church needed to be extended.  The north aisle, a baptistry and a new entrance porch were added.   In the booklet printed to mark the centenary of the parish in 1979, Canon Richard Stewart writes “The building is good and the style fits the rest of the church; but whether the extensions are entirely happy is another question, since the sanctuary is visible from only about 25% of the seating in the north aisle.”

The baptistry and the entrance porch were taken down in 1994 and a narthex created;  this included toilet facilities, new sacristy and shop.  The central entrance arch and double doors were reused.   The 1930s porch had an entrance on the south side which was very exposed to the weather.   This was relocated to more sheltered north side.   The architect was Deidre Waddington, a parishioner.

Both Captain Gaisford and Fr. Roe were educated at the Oratory School, still under the direct influence of  John Henry, later Cardinal, Newman, who had founded it in 1859.

Cardinal Manning who presided at the opening of the Church was the second Cardinal Archbishop of Westminster following the restoration of the hierarchy in 1850.

John Hardman & Co. Ltd. worked closely with Augustus Welby Pugin, producing many of his designs.  The windows in the Palace of Westminster, (apart from those in the House of Lords), together with much of the decorative metalwork, were supplied by the firm.  To quote from their website “Throughout the world most major cathedrals, churches and many civic buildings contain [work] made by Hardmans.”

The architect E. Ingress Bell collaborated on buildings such as the Victoria Courts at Birmingham, the new Admiralty Offices, and Birmingham University. The Sacred Heart may be his only church.

The Irish Guards were founded in 1900 by order of Queen Victoria to commemorate the bravery of the Irish people during the Boer War.   Their chaplain, Fr. John Gwynn S.J., had regularly preached at the Sacred Heart Church before World War I.   He went to France with them and died of wounds at Bethune in 1915.

Fr. Walter Cooksey, our second parish priest, was also an army chaplain in the latter years of World War 1  serving at Salonika, the Western Front, and finally with the occupation forces in Germany.

Fr. Maurice Roy who was chaplain to the many French Canadian troops station in the district during World War II  later became Cardinal Archbishop of Quebec and Primate of Canada.

Fr. Cyril Scarborough, curate from 1932 to 1935 and Parish Priest from 1955 until his retirement in 1979 became an army chaplain when World War II broke out.   He was taken prisoner at Dunkirk, spending the rest of the war in prison camps, ending up as padre in the notorious Colditz.

Examples of our murals 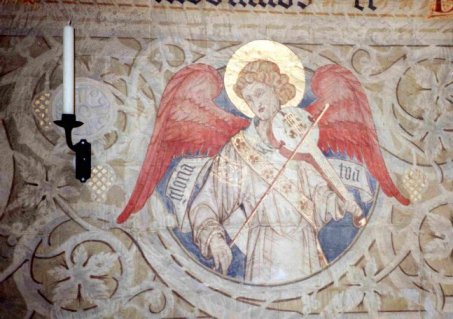 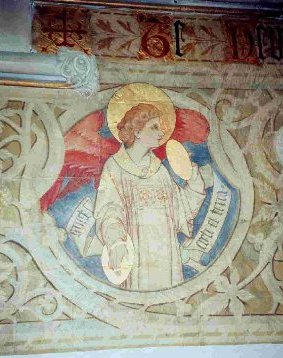 Acknowledgement: The Catholic Church in Caterham 1879-1979 by Richard L. Stewart